The OBPP is backed by over 40 years of research and has been recognized as the most extensively studied bullying prevention program of its kind.

The first evaluation of the program took place in Bergen, Norway and targeted 2,500 children in grades 5-8 over a period of 2½ years between 1983 and 1985.  Findings revealed:

The first evaluation of the OBPP in the U.S. involved students in elementary and middle schools in South Carolina in the mid-1990s.  After one year of implementation, and compared with schools not implementing the OBPP, researchers found:

Researchers have recently conducted the largest evaluation of the OBPP to date in the U.S.  Analyses included more than 72,000 students at baseline assessment in grades 3-11 from 214 schools.  Findings revealed:

The research was published in August 2018 in the Journal of School Psychology and can be accessed here.

Findings revealed that the OBPP was succcessful in reducing all forms of being bullied and bullying others. Read that study published in the International Journal of Bullying Prevention here.

An evaluation of the Olweus program in 12 elementary schools in the Philadelphia area found significant reductions in observations of bullying at recess and lunch.

Six follow-up evaluations of the OBPP have taken place in Norway, involving more than 20,000 students from more than 150 schools. Findings from students in grades 4-7 revealed consistently positive program effects.

Long-term effectiveness of the OBPP in Norwegian schools 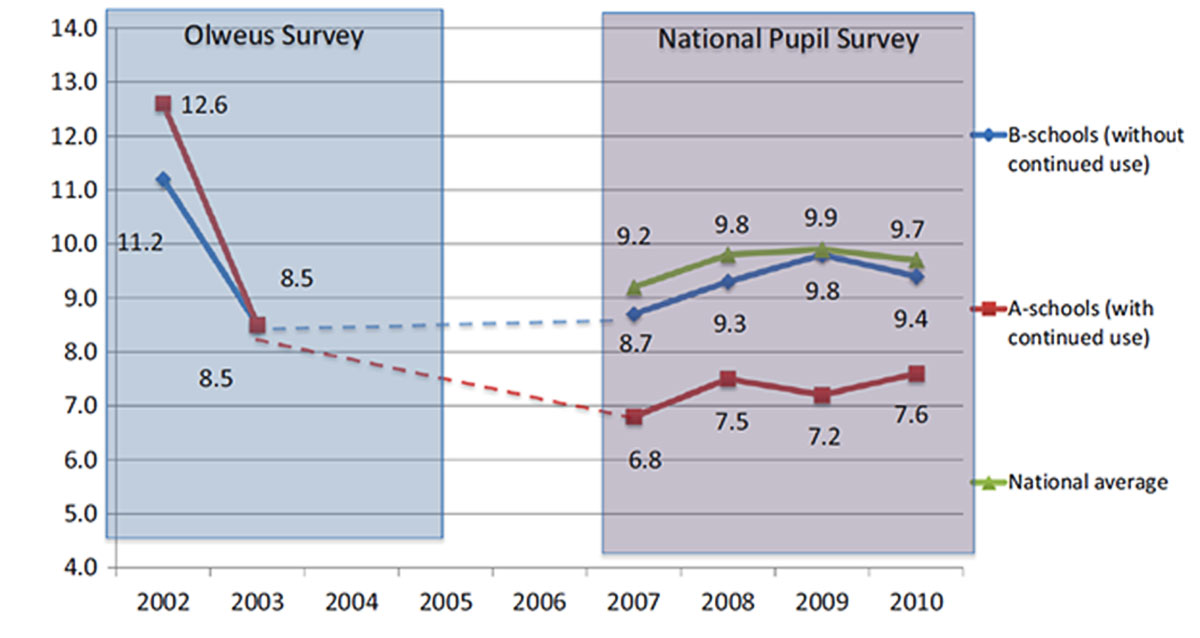 In fact, the likelihood of being bullied in a non-Olweus school was nearly 40% higher than for students who were in schools that continued to implement the OBPP. Results suggested that schools that continued to implement the OBPP had altered their school culture with regard to addressing and preventing bullying. As the authors noted, “the results of our study emphasize the general importance of schools sticking to a program that can document positive effects and letting it become a part of and pervade the schools’ everyday routines. The findings also support our general view that the OBPP should not be seen as a circumscribed, time-limited “program” but rather as a set of principles, procedures and mechanisms designed to create a safe and humane school environment where bully-victim problems are systematically addressed, handled and prevented.”

Meta-analyses by Ttofi & Farrington revealed that bullying prevention programs are effective in reducing bullying.  These authors noted that those programs “inspired by the work of Dan Olweus worked best” (Ttofi et al., 2008, p. 69).